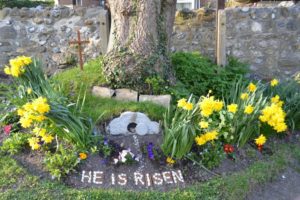 The Easter message that Christ is risen is either the supreme fact of history or else a gigantic hoax. The early church recognised that.  On the one hand there was a small group of men and women who turned the world upside down by the miracle that had changed their lives.  On the other hand some denounced the whole thing as blasphemy.

If the Easter message is true, if it is the supreme fact of history, then that must have a profound implication for our lives.  If it is not true, if Christ is not risen, then the whole of Christianity is a fraud which has been foisted on the world by liars.  And as St Paul said ‘if Christ is not raised then our preaching is meaningless and our faith worthless’ 1 Corinthians 15v14

After investigating the evidence for the resurrection, Lord Darling who was former Chief Justice of England said ‘There exists such overwhelming evidence, positive and negative, factual and circumstantial, that no intelligent jury in the world could fail to bring in a verdict that the resurrection story is true.’

Ladies and gentlemen of the jury, this is the evidence that demands a verdict.  What is your verdict?

That is why Christians can shout ‘Alleluia’, not only at Easter, but at all times.

Alleluia!  Christ is risen.  He is risen indeed.  Alleluia!

Lord of all life and power,

who through the mighty resurrection of your Son

overcame the old order of sin and death

to make all things new in him:

grant that we, being dead to sin

and alive to you in Jesus Christ,

may reign with him in glory:

to whom with you and the Holy Spirit

now and in all eternity. Amen