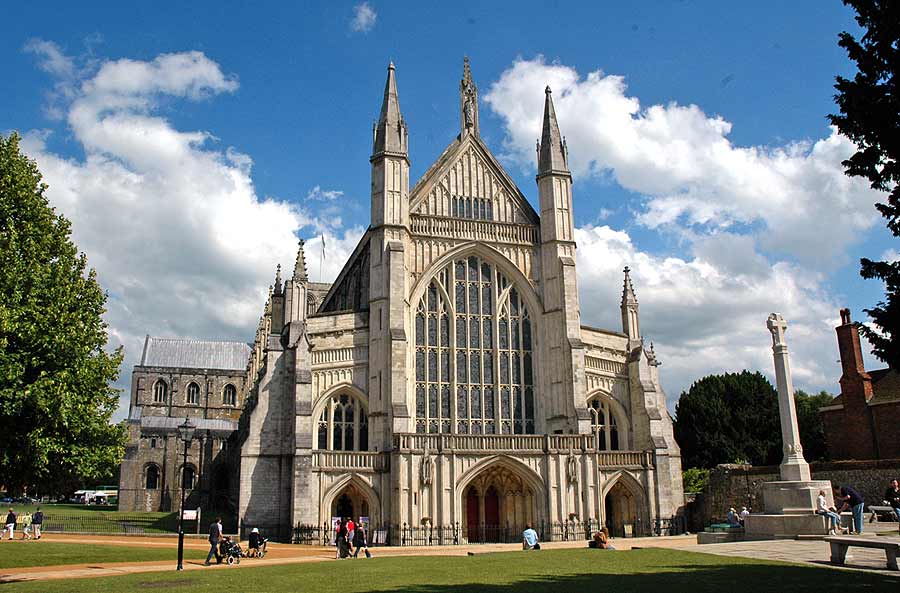 TRANSPORT OF DELIGHT  for our lucky Woods Coach Driver, as he was treated to a hymn sandwich – at the start of our journey – ‘Guide me O Thou great Redeemer, PILGRIM through this barren land’, then homewards ‘He who would valiant be . . . . . his first avowed intent, to be a PILGRIM.’ Rev Mark then invited us to burst into song, should we wish. The only song which sprang into mind was ‘Winchester Cathedral do-do-be-doo-da . . .!’

Safely there within an hour and Rev Mark led a beautifully informal Communion Service in The Epiphany Chapel, where we greeted one another during The Peace with, ‘Christ is risen!’ The Burne-Jones stained glass window behind the altar shows the Three Wise Men presenting their gifts to Mary – It was pointed out to us that Mary is turning slightly away from the Magi, trying to protect Baby Jesus from such gloomy gifts.

Chris, our Guide for an hour’s tour, was a cross between teacher/actress/comedienne – an absolute joy to have met. There were so many stories to tell and to hear – Mary Tudor walked down the longest aisle in Europe to marry King Philip of Spain, who was much shorter than she. He’d given her a wedding present, a very valuable diamond necklace with a huge pearl dropper in the centre. When the marriage ended, rather shortly afterwards, the gift was sold in an attempt to affray the huge cost of the celebrations. During the 100s of years which passed, it was sold many times, fetching ever more large sums until it was purchased by Richard Burton for his wife, Elizabeth Taylor, for £6,000,000 or it could’ve been £60,000,000 – over £1million, it all seems meaningless. Liz wore the jewels for a party at home. During the evening, she found the pearl too heavy and placed it on a mantelpiece, from where it rolled on to the floor. Her pet pooch gobbled it up, but a short wait and it all ended happily! Elizabeth later sold the necklace, giving the proceeds to the AIDS Charity.

1906 – 1911 William Walker worked beneath the water and the Cathedral in his diving gear, sawing up the soggy remains of the buried rotting trees foundation (by hand, no elaborate electrical machinery) replacing them with cement, thus saving the subsiding Cathedral. He was the father of 13 children from his marriages to 2 sisters (the first of whom died before he began work at Winchester). After his death, the consecration of a statue to him was unveiled, which caused his wife to faint, saying ‘That’s not my Billy’ – the sculptor had been given the wrong portrait to copy. Not until 2000 was this error rectified.

Jane Austen is entombed beneath the Cathedral. She died after a few short days on a visit to Winchester. A careless junior clerk copied the details of her death certificate and on her plaque, it appears that she was buried 3 days before she died!! Chris assured us that she breathes no longer! (Now that I’ve criticised an ancient recorder, do so hope that the eagle eye of our Editor will correct any mistakes of mine!!)

The Chandos Chamber Choir from London enhanced the Evensong worship with their perfect singing and off we went to find the coach. I took a photo of King Arthur’s statue in the City, only to be told by someone who’d had an interesting History Teacher, such as Chris, that it was/is King Alfred!

Many thanks to Roland for his excellent planning and leadership – another day to remember for us all.